“My brother dabbles in stocks,” said the winningly frank B&B landlady, slight, short-cropped, and in her mid-sixties, as she caught me leafing through the Nikkei over morning coffee on the terrace.

“Only as a hobby, mind. He’s retired now. He was a salaryman, back when times were good.” She meant the Bubble.

“But us self-employed folk, with our meager pension pots, well, we’ll just have to keep working until we drop.”

She would have had a little more in her pension pot, I reflected maliciously, if she hadn’t amassed the vast collections of ceramic clowns and brass reception bells arrayed in the lobby—not the last time that day I was to come face-to-face with the obsessions of the collector.

“We had a French intern with us this summer. After the accident, she was the only one in her class to come back. Loves it here, she does, wants to get a job here after she graduates. But things aren’t the way they used to be, are they?” I agreed they weren’t; they rarely are, these days.

“What brings you to Kiyosato?”

“I was wondering what there is to do here.”

“Yes, do. In Kiyosato.” Aside from letting a Jersey ice-cream dribble down your fingers while rifling through knick-knacks in the last few souvenir emporia.

“There’s skiing, in winter of course.”

“Down at Cote de Vert, you can pet farm animals and let your dog off the leash, let it run free.”

“Here,” she said, handing me a local brochure, “you can read.”

After meandering the highways and byways for a day, at least five distinct ecosystems in Kiyosato revealed themselves: the tumbledown center, built up and brought low by the Bubble: the farmers—of corn and cabbages and cows—who have their own sad tales to tell, some forebears having arrived before the war from dam-flooded villages near Tokyo and some forebears after the war, repatriates from ill-starred settler colonies in Manchuria and elsewhere in the empire, forebears who found scratching a living from the unforgiving high plains almost intolerably hard at first; the owners of besso holiday homes, homes that run the gamut from rustic pine dachas to old-money piles with private tennis courts and hypermodern concrete-and-glass affairs; a crescent of lavish dormitories to the north-west belonging to universities—Meiji, Aoyama Gakuin, and Nihon—and to Tokyo commuter-belt cities—Tachikawa, Fuchu, Chofu, Kodaira, and Hino, short stays at which are free for their lucky residents; and a community of potters, weavers, woodworkers and other artisans in the cheaper, lower foothills to the south-east. The economy will truly have to fall into rack and ruin before the farmers, the bessoites, and the dormitory sojourners feel much anguish, and it is they who provide the residual flicker of vitality, although none of them can be of any comfort to the hoteliers and little to the restaurateurs.
Then there were the museums.

Down a long and winding lane that swung between fields of corn, now as high as an elephant’s eye, and prim and proper besso, stood the Kiyosato Museum of Photographic Arts, which likes to style itself K*MoPA. The staff were stiff, the echoes were cavernous, and the lavs were marble. Museum-goers were notable only by their absence. The exhibition, titled Great Spirit: Photographs of Curtis, Sardar-Afkhami, and Yagi, showcased the early twentieth century “noble savage” Native American photos of Edward S. Curtis, some jaw-clenching and jaw-dropping Mongol images by Hamid Sardar-Afkhami, of whom I’d never heard, and in a sop to the locals, some tepid Aleut shots by Kiyoshi Yagi.

Of as much interest, though, was how the museum could possibly finance itself. Its negligently maintained website reveals superfluously that its restaurant, La Premiere (I did say we were very French around here) closed in 2006. I sat where its terrace had been, sipping a watery vending-machine coffee. Its resort facility, Patrie (I did say), closed at the same time—it was clear the museum was now clad in concrete clothes far too big for its shrunken dimensions. Its funding sources and ownership structure have defied my best attempts to prise them out, however, so I can only conclude it is a yakuza money-laundering front.

Down at Cote de Vert (I did say we were very French, if grammatically inaccurately so, around here), lay another museum, the unimaginatively named Kiyosato Bokujodori (“Ranchroad”) Antiques. This was more of a one-woman affair; in her mid-fifties, the owner fussed intrusively over slipper provisions while revealing she had lived a decade and a half in Australia. The second-floor museum, dedicated largely to old Noritake porcelain, was half shop; the first floor was all shop. As an occasional though now largely dormant collector of ceramics, mostly somber Bizen-yaki and neoclassical celadon, I have strong opinions about old Noritake: most of what remains should be piled in a heap in the road and run over by a fleet of steam-rollers, although I would spare the occasional late pre-war Art Deco piece, such as this sugar bowl. 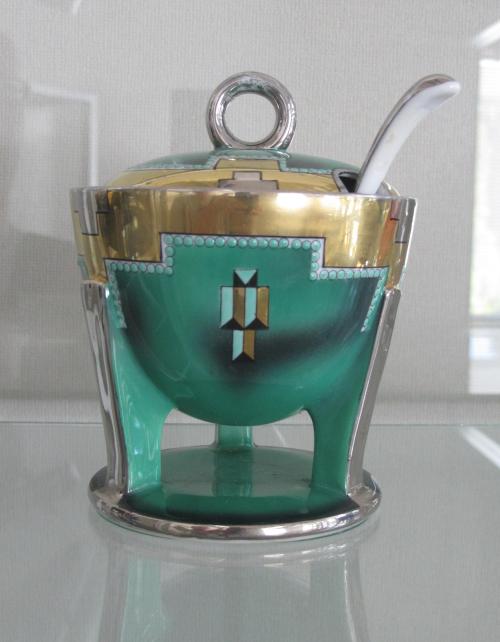 It wasn’t wholly the fault of the Noritake company, to be fair; they were catering to fantastically depraved late Victorian tastes. The owner explained that some eighty percent of old Noritake went to the US, ten percent to the UK, and ten percent to the UK colonies; nowhere was the attempt to accommodate local sensitivities better on display than in this plate for the Australian market, depicting a pair of not very lifelike Kookaburras sitting in the old gum tree. 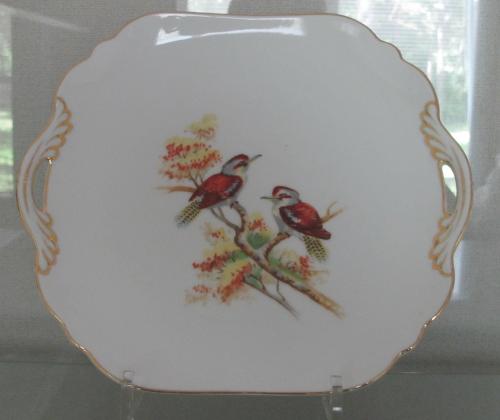 I wondered about the impulses behind the retrieval and repatriation of old Noritake: by my book, at least, it is severely subtracting from rather than adding to Japan’s GDP (gross domestic pulchritude).

“The Satsuma-ware was quite attractive.” Although at $6,000 or so for this tea caddy, it was just out of my price range. 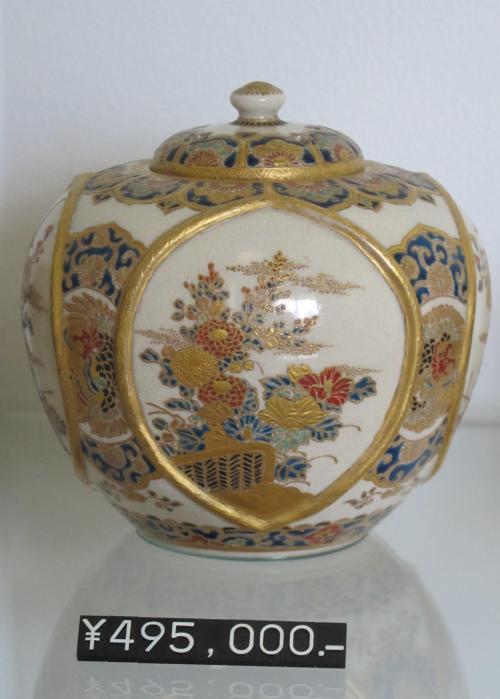 “Oh yes, all the foreigners like that. It’s so colorful, gaudy even.”

Your old Noritake is not a model of understatement, I thought to myself.

“I’ll be closing for winter next month. I spend six months here and six months on the road abroad, collecting.”

“Oh no, not at all!” She recoiled, horrified at the accusation, and I made my excuses.

Damned hard to find, the Kiyosato Museum of Contemporary Art was an implausibly modernist confection to come across at the end of a rutted gravel road best navigated by a four-by-four. By “contemporary”, the curators meant bleeding-edge avant garde from World War One Duchamp Dadaism through to Christo’s wrapped “environmental art”, with an accent on the High Dadaesque Modernism of Fluxus (“purge the world of bourgeois sickness”) and John Cage from the fifties and sixties. Their clock had stopped in 1990 or thereabouts; there was nothing “contemporary” on show at all. Most ultramodern art has always struck this determined middlebrow as the province of charlatans, fraudsters, and conmen, and there was little the museum offered to change my mind, although I was smitten with Christo’s oil drums, 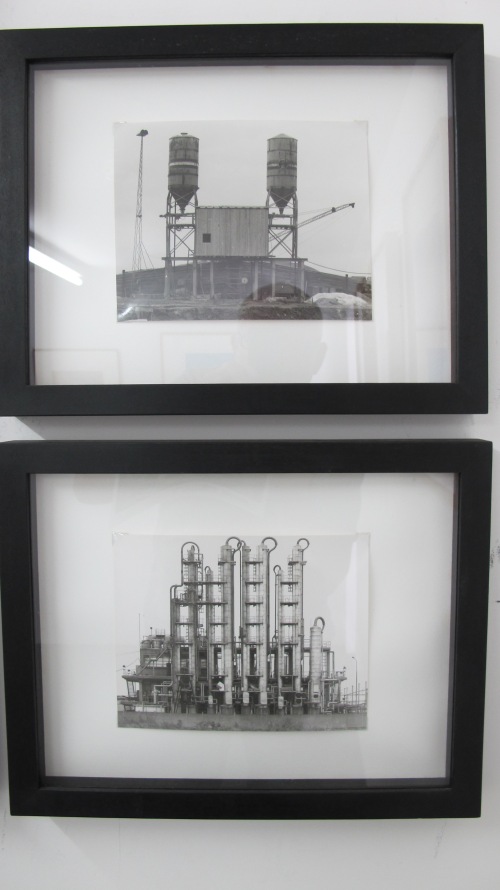 and this shot of the lunatic Lithuanian George Maciunas, Fluxus guru and inadvertent pioneering gentrifier of New York’s SoHo warehouse district, unsung hero to the bourgeoisie he professed in his too short life to despise.

As intriguing as the art on its floors and walls and doors was the museum itself, which, in betrayal of any minimalist aesthetic that might be associated with much of modernism, was brimful to bursting with piles of posters and books and assorted paraphernalia. 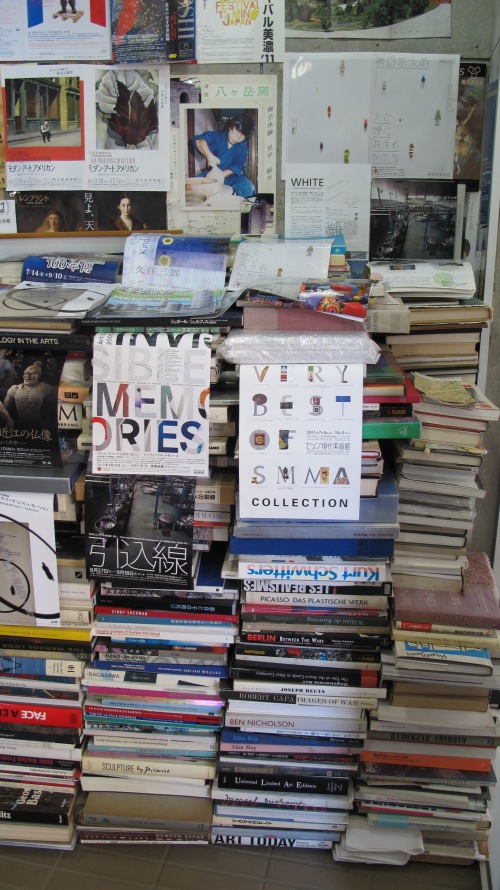 Clearly the museum was the product of a very personal mania; while there were no truly costly works on display, no Duchamp Fountain, say, or Yves Klein monochrome, the collection must have cost a small fortune to assemble. In an annex at the back, a man in late middle age, leafing through a catalogue, struck up a conversation.

“We don’t get many foreign visitors. Where are you from?”

“Oh, Britain’s been very helpful to us,” he said with a gratitude that made me feel personally responsible for the assistance rendered. 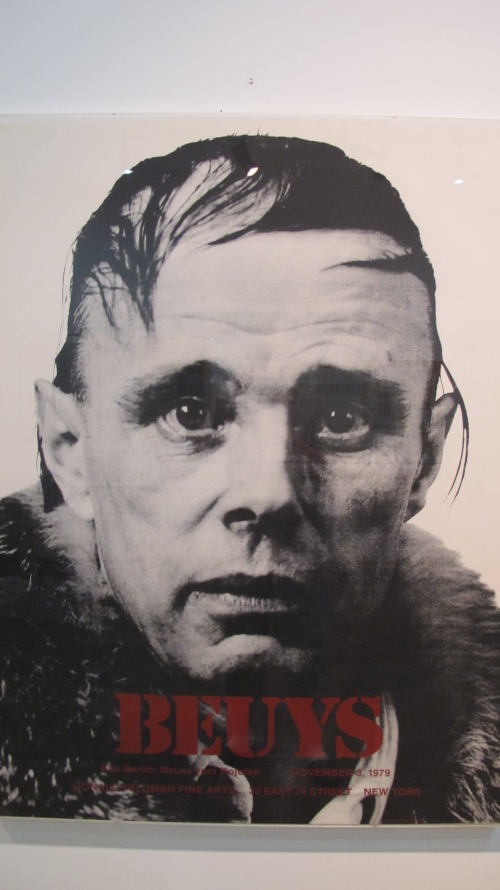 for us a while back. The thing is, the museum can’t truly pay its way, not on the admission fees. The season’s so short, the visitors are gone by October.”

“That’s my brother.” He gestured at another man in late middle age, leading around a small tour party, whose members were also uniformly in late middle age. “He built this place, twenty years ago. I retired and joined him last year.

“Japanese people,” he harrumphed, “they’ve got no time for modern art. Thirty seconds in here is enough for most of them.”

I tried an upbeat tack. “But things were different back in the sixties, weren’t they? More folk were interested in those days, no?”

“Not really. Most people were only interested in getting rich. It’s a shame. I lost my house building up this collection. Now I guess we’ll have to sell up and close down in a few years, if things go on this way.”

There can be little doubt that things will go on, kono mama, in this way. To have spent one’s adult life acquiring, accumulating, above all collecting, and to be faced in old age only with dissolution, the brutal whittling away of what was so patiently and painstakingly amassed; well, it would be more than this curatorial heart could bear.

Like its better-looking and better-off sibling, Karuizawa, whose flagging fortunes were reputedly restored by a Scottish-Canadian theologian, Alexander Croft Shaw (1846-1902), a foreign missionary godfather (of a later generation) was instrumental in the development of Kiyosato: American Paul Rusch (1897-1979), who orchestrated the construction of Seisenryo, a “Christian fellowship youth retreat” in Kiyosato in 1938. It’s fitting, if regrettable, that otherwise godless Kiyosato, devoid of Buddhist temples and Shinto shrines, a once creamy cheesecake slice of the foreign set upon a native plate, should have had a Bible-thumping mentor.

At the now sprawling Seisenryo complex, there were suddenly tourists, busloads of them shipped in on daytrips from the plains to do not very much, save buy trinkets and slurp ices and admire Mount Fuji from afar.

Busloads, but not busloads enough to save the heart of Kiyosato from an aortic aneurysm.

There were other, still more curious attractions to explore—The Japan American Football Hall of Fame and the Dormouse Museum (“no live dormice were used in the creation of this exhibition”, the sign assured)—but for museumed-out me they would have to wait. A faint fondness for Kiyosato welled up as I prepared to take my leave: where else in the world, after all, can you run across a mid-sixties Mazda whimsically plomped on the roof of a roadside flower-shop shipping container, 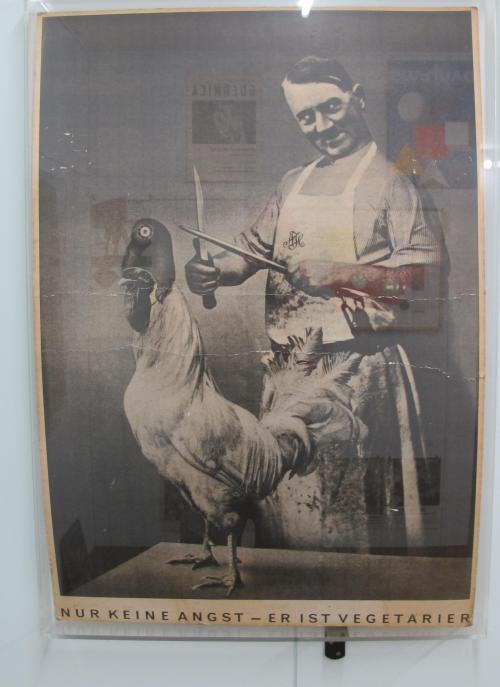 and still be home in time for tea?

This entry was posted in Emptiness, History, Honshu, The Bubble. Bookmark the permalink.