Update 2: In the neighbourhood

“In the neighborhood”, Tom Waits

Of course, you don’t have to go all the way to the wilds of Gunma to sniff out decay;  plenty is available within a 300m radius of home, which is where all the following photos  were taken. Just a little context: to the north and east of where I live in Akebonobashi lie  some of the most expensive residences in Shinjuku Ward, which while being more prole  than say Minato Ward, is mostly middle class with patches of seediness thrown in for  good measure, as you’ll perhaps recall. To the south and west, on the way to Yotsuya  3-chome station, where the first quartet of these photos were taken, are some pricey  apartment blocks mingling in with some less pricey ones of the 1R (one-room) variety.

Having been in the neighbourhood for nigh on eight years now and as a (very) small  business proprietor myself, I’m sensitive (I like to think) to changes in the urban furniture.  Our first photo is of Nonki, a purveyor of motsuyaki, or as the online dictionaries have it,  ”roast giblets”. I think I would refer to it as grilled organ meat, but either way you get the  picture. No, I have never darkened the door of a motsuyaki restaurant, nor do I plan to.  This location is an interesting one; for many years it was a convenience store, then for a  couple of years a Y100 shop, and for the last year a motsuyaki joint. The reason it appears here  is that it exemplifies what I would call early post-war retro Showa chic in its determined  attempt to take its customers back to the 50s, when times were, like now, hard, but  at least there was hope – and Hoppy, which is being advertised in the vertical white sign  by the door and is a bizarre only-in-Tokyo non-alcoholic beer that is also a conscious  throwback to the early postwar years.  Note the cushioned upturned beer crates on which customers sit in another arch statement  of poverty chic. This place is always busy at night (and not open at Sunday lunchtime,  when these photos were taken).

Our second photo is of a women’s clothing store a hundred metres or so up the street – “Heiten!”, screams  the red sign in the window, closing down on March 15. Imminent or recent closure is a fate it shares with at least half a dozen  shops and restaurants in the immediate vicinity.

…including this soba place opposite, which shut down a week or so ago.

If you look below the frosted glass on the  right, you can see, just about, that all the furniture has already been removed, as indeed has the entire kitchen-I passed by as the interior was being dismantled. This place was opened by the proprietors of the udon restaurant  that is the single closest nosherie to my flat and it lasted a good couple of years, but somehow never caught on and  in its last few months was largely deserted even at peak dining times, not that there was anything wrong, IMHO, with  the quality of the food that it offered. It was difficult to walk out without spending Y3,000 a head, though, which is frankly these days beyond the reach of many people.

Next we have what is to me the single scariest photo in the collection. The Fairfax Grill has been an  anchor in the neighbourhood ever since I arrived in it; it’s a kind of modern bistro and when  the weather is remotely decent the wooden slatted doors are opened up and the patrons  are treated to what is as near al fresco dining as Tokyo gets. It used to be hugely popular  for leisurely Sunday brunches but the crowds have thinned and at some point in the  last couple of years they introduced a downmarket prix fixe lunch menu, including a  jarring “hamburger set” (for Y1,800) in a bid to woo back the punters. All to no avail; there  were just four people in the place last Sunday at 12.30pm when this photo was taken.

Back down to Akebonobashi; this is the local branch of a clone of famous barber’s shop QB House. 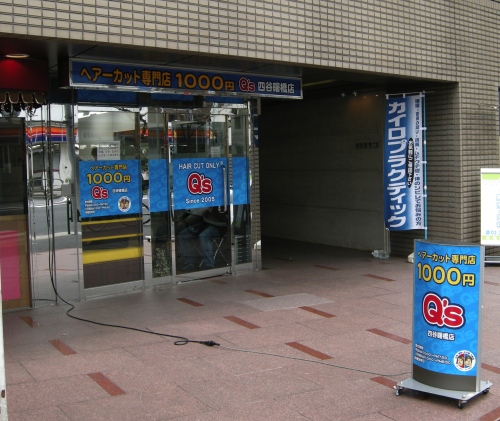 How much blue ocean there could be around if the business model can be replicated to the smallest detail baffles me.  Y1,000 hairdressers such as Q’s are spreading fast in the land of the Y15,000, three-hour perm.

And this is the entrance to Akebonobashi’s shotengai (stationfront shopping street), replete with the  inevitable cat’s cradle of wires. 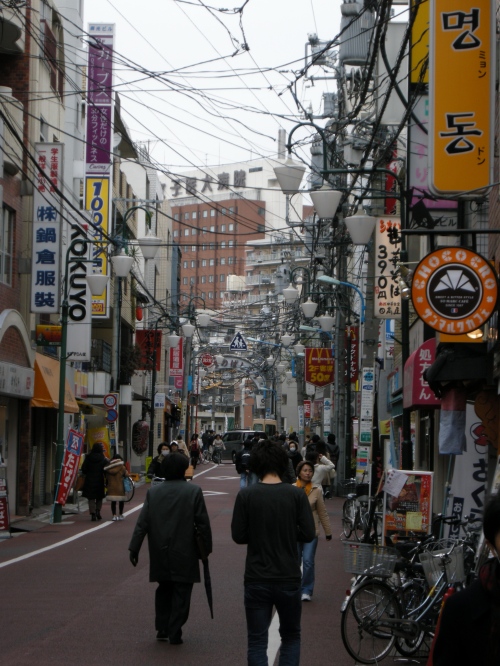 For a relatively prosperous district, the lack of decent restaurants  and bars is striking. Note the Y100 shop on the left, the Y390 ramen shop on the right, and the McDonalds on the right, all of which are doing roaring business.

While Japanese share prices have tanked over the last year, the shares of the  ramen joint proprietor, Hiday Hidaka, of McDonald’s Japan, the sole listed Y100 store operator, Can Do (it doesn’t run the one in the picture), have held their ground or even risen.

The survival of many of the outfits that do stay in business flummox me. This place, Ciao, is directly behind my flat, and is, believe
it or not, a gay bathhouse, though you would have to find that out from indirect sources. No, I’ve never been in; anyway, it’s members
only, as an unwelcoming sign on the door informs.

I wonder if the woman with the dog, or indeed any of the passers-by, know what they’re walking past. In the early years, I would
occasionally see someone furtively enter or leave when passing, but I haven’t for several years now.

Ciao is directly opposite the offices of Big Issue Japan; Big Issue has been  in Japan since 2003 but only in my neighbourhood for a couple of years. Every morning on  my way to the station I pass a clump of homeless men gathered around the bottom of the stairs  waiting for the offices to open and exchanging cheerful small talk. With contract workers being  thrown out of their factory accommodation in their thousands, homelessness is going to be  a bigger issue than ever.

I could have taken so many more photos; the restaurant just down from  the Big Issue office that opened and closed again within the space of the last six  months, the pharmacy nearest my flat which shut for good a couple of weeks ago,  the florists nearby it that was an early casualty, the tea cafe that is perenially  deserted, the kimono store whose husband and wife proprietors who are supremely talented at making themselves look busy in the absence of customers…
The odd thing is, Rehab’s not doing too badly.

7 responses to “Update 2: In the neighbourhood”