The airplane to heaven

I came across the airplane to heaven on the second day in a row I had tried and failed to get to Battleship Island. There are two ways onto the island: the official front-door and the very unofficial back-door. Being more interested in the haikyo ruins boom the island has stoked and the campaign to have it made a World Heritage Site than the ruins themselves, spectacular though by all accounts they are, I wanted to take the front door, but the rainy season was thwarting me: in safety-first Japan, tourist boats only put out for the island when the sea is millpond still.

Although weather reports warned the waves would be too rough for the voyage, I set off south on sodden, snarled-up roads to Nagasaki and the 10:30 meeting point, frantically calling the endlessly engaged mobile of my contact at the tourism bureau along the way. “Guess he’s letting everyone know the trip’s off”, I thought to myself, but pressed on regardless, angst mounting that the odds of arriving by the appointed hour were anyway growing slender.

Halfway to Nagasaki and with the sands of time almost gone, I called off the chase. “Relax, you’re on holiday.” Bathed in relief, I decided now was the moment for random stuff to happen. And within a few minutes, it did.

A stooped old man scythed away with a strimmer at swathes of grass on the banks of the field.

“That’s a wonderful old plane you’ve got there.”

“Oh, that’s not mine. It belongs to an elderly neighbor.”

“Ooh, about 15 years, maybe 20. Truth is, the old man bought it and had it put here so it would carry him to heaven when he dies. But now he’s worried that the plane will fall apart before he does, while he’s still alive.”

He used a lovely expression—me ga kuroi uchi ni, while his eyes are still black—that I’d never heard before.

I took a walk around the plane, poised to soar above the waters of Omura Bay. The rear port door had dropped off and lay in the mud where it had fallen, exposing the rank  interior to the elements.

“He should get that door fixed up and stop the rot inside.”

“But he does get someone to clean the cockpit windows, so he’ll be able to see where he’s going when he takes off.” 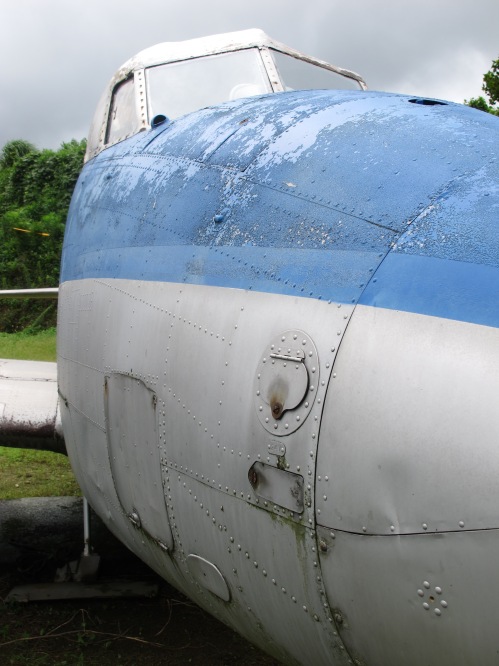 “Some American once came to see the plane all the way from Kumamoto.” He made it sound as remote as the antipodes. “Said he’d learned to fly on the same type of plane. Wanted to buy it off the old man. But the old man wasn’t having any of it. Sent him away with a flea in his ear.”

At least, I think that’s how the story went; I still have trouble keeping up with the mumbles of the aged, and the further from Tokyo, the tougher it is.

“They say it was made in Britain. Is that right?” He didn’t know where I was from but took me as an expert in all matters foreign.

“I don’t know, to be honest, but I bet I know someone who does.”

Back home, I set my network of sleuths to work and had an answer within a week. This DH.104 “Dove” rolled out of the de Havilland factory in Hatfield, north of London, in January 1957, reaching Japan a month later, where it was flown by Nippon Helicopter and Aeroplane, the earliest ancestor of ANA, and later by Nihon Yuran Koku (Japan Sightseeing Airlines), who nicknamed it “Neptune” and—I think—flew it on routes around the Izu archipelago south of Tokyo, before being scrapped in 1968 after just 11 years of service and put out to pasture on display at Nagasaki Aquarium, remaining there for three decades until the aquarium closed in 1998, when it was acquired by its present owner as his passage to paradise. Of the 542 Doves produced, this is one of two left in Japan, with the other one reportedly in a sorry state, too.

So if you’re ever on the road between Sasebo and Nagasaki, keep an eye out on the bayshore side for this old bird in a little village called Nagaura. You can’t miss her. And if she’s gone, well, you’ll know that the last grain has fallen in the hourglass of her unsung pilot and that he’s taken wing—the wings of a Dove—on the last flight of his life, aboard the airplane to heaven.

2 responses to “The airplane to heaven”