Kashiwazaki Turkish Culture Village and the psychology of nuclear power

I thought this Account of the struldbrugs might be some Entertainment to the Reader, because it seems to be a little out of the common Way; at least I do not remember to have met the like in any Book of Travels that hath come to my Hands; and if I am deceived, my Excuse must be, that it is necessary for Travellers who describe the same Country, very often to agree in dwelling on the same Particulars, without deserving the Censure of having borrowed or transcribed from those who wrote before them. 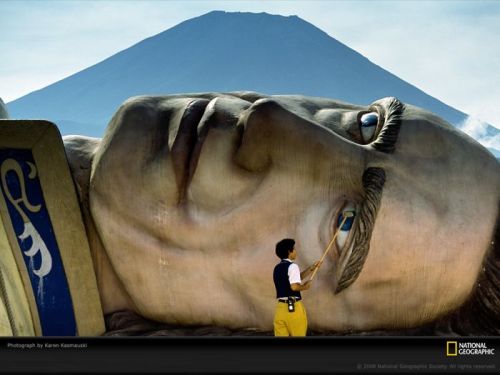 In 2002, the Kingdom was auctioned off at the third attempt to a resort operator and in 2004, a sliver of it reopened as an attraction called The Dog Run, whose unique selling point was that here, and only here, dog owners could let their pooches roam free on grass. It lasted a year. In 2006, the land was sold again, to a hugely ambitious Hiroshima-based real estate developer, Urban Corp., captained by another dreamer and schemer, Hiroyuki Bozono, which was felled in August 2008 with debts of $2.5bn, the biggest bankruptcy in Japan in six coddled years, brought down by leverage-fuelled overhasty expansion, a whiff of links to organized crime, and most proximately and perhaps most disastrously, a complex $300mn convertible bond and swap deal with French bank BNP Paribas, closed as the hyenas and jackals started to prowl, a deal on which disclosure was not, shall we say, full, frank, and fair, one in which Urban Corp. thought it was borrowing Y30bn from French Peter to pay Japanese Paul but ended up with less than a third of that, as the deal was linked to the share price and BNP Paribas was furiously converting the bonds into shares and selling them, driving the shares lower in a panicky market on the precipice of the Lehman Brothers collapse. Banksters, eh? Just a few rotten apples, to be sure. For an unfathomable reason I’m reminded of an observation of psychologist Paul Rozin, an expert on the cultural evolution of disgust, that “a single cockroach will completely wreck the appeal of a bowl of cherries, but a cherry will do nothing at all for a bowl of cockroaches”. Meanwhile, in 2007 Gulliver and his Kingdom had been dismembered limb from giant limb to make way for the grand resort that Urban Corp. was planning. After Urban Corp. went tango uniform, the land was auctioned off yet again, unpropitiously just days after the Great East Japan Earthquake in March 2011, and there the trail, as doggedly as I can pursue it, runs cold. In death, Niigata Russia Village has enjoyed a more sedate and less chequered passing than Gulliver’s Kingdom, no doubt because of its undesirable real estate location in the sparsely inhabited hills behind Niigata City, where it has been left to rot and ruinify, the only events of note an arson attack in September 2009, which partly razed its hotel, and numerous small acts of vandalistic love, ably photochronicled here. But what remained of the physical relic-icons of the Kashiwazaki Turkish Culture Village? On this the massed resources of the Internet drew a blank. It was time, I felt, to investigate.